HOMAGE TO THE ASTRONOMER CAMILLE FLAMMARION BY CHARLES RICHET 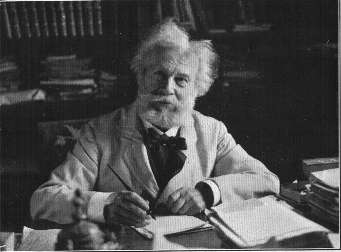 CAMILLE FLAMMARION
We have just undergone a cruel loss. Here what disappears, in full intellectual power in spite of its great age, our heroic friend Camille Flammarion. He was a large scientist. He was a noble poet. He was a burning friend of humanity and peace. He was also one of faithful of our holy cause, and, as he had the worship of the truth, the problems which occupy us here animated its last years. Almost child still, it impassioned himself for astronomy.
Then it entered to the Observatory. But the Glassmaker, the famous director of this great establishment, admitted the enthusiasm of the observers only for the figures. While entering to the Observatory, Camille Flammarion had believed that it was going to be able to study the stars, to admire the starry sky, the most beautiful spectacle which the men could contemplate. Instead of that, it had only calculations to make, so that at the end of three years, disillusioned, it left the Observatory.
Astronomy however always attracted it, and there was determined to remain astronomer. But it had too much independence in the spirit not to follow a personal way, because it was one of the characteristics of this great mind which to be, as of its youth, which got excited of the new things and even of the adventures. At one time when aviation did not exist yet, it was interested actively in aeronautics, and made, in the most various airships, many voyages of which some remained famous.
It was not a banal sport; it was made aeronaut to study the multiple weather problems which can be solved only by the exploration of the atmosphere. Its discoveries in astronomy follow one another quickly. It melts the astronomical company, and thanks to a generous giver, can institute this beautiful Observatoire of Juvisy from which it drew so strongly party for science. It could have rested. With its observatory of Juvisy, it had almost arrived at the apogee of its desires. But of the men as him do not rest. All that succeeds to them becomes stimulative for new effort and new work. It gave itself three tasks to which it was delivered entire.
The popularization of astronomy, peace enters the men, and the problems of the métapsychique one. Helped by her generous partner, Sylvie Flammarion, close it always finds admiration and comfort, it publishes without wearying herself on the astronomy of the excellent books. It can make astronomy popular. Its books, where such an amount of poetry is linked with such an amount of science, are read by all, large and small. It finds a public enthusiastic which ends up including/understanding something with the universe. One could not exaggerate the favour of the name of Flammarion, universal favour which still continues.
He was really the apostle of astronomy, skilfully mixing poetry with the starry skies with the rigour with the positive observations. Its book "Dreams spangled", was drawn with 142.000 specimens. The plurality of the worlds, to 45.000. One could have supposed that so many people in France were interested in astronomy. One needed for this miracle its clear and eloquent style. It is in Flammarion, and Flammarion alone, which the popularity of astronomy in France is due. Flammarion one was also impassioned friendly of peace. His wife, Sylvie Flammarion, chaired, with a softness and a rare energy, the female companies for peace. As for Camille, that Sylvie called readily Flam, it never missed the occasion to announce painful contrast between the celestial harmonies of the immense world and the fights inept, wild, cruel, to which the men, very wild still, deliver themselves on their weak planet. What a abominable and painfully grotesque spectacle, that our monstrous wars! Which contempt we all must have for humanity by seeing our poor wretch smallness who tears by the battles instead of growing itself by the contemplation of the worlds.
But what interests us here especially, it is less the brilliant career of the scientist and the writer, who his enthusiasm for metapsychic sciences. With its generous spirit, avid of innovations, impassioned for the truth, it was thrown resolutely in the fray. It published remarkable books filled with facts. I mention them here, though all our readers undoubtedly know them: Unknown natural forces, 2 vol.; Psychic Unknown and problems, 3 vol.; Haunted Houses, 1 vol.; Death and its Mystery, 3 flight. The quoted facts are innumerable. If there is something to reproach these beautiful works, it is that sometimes the enthusiasm of the author makes him somewhat give up the severity necessary of criticism.
But what a splendid heat! what a youthful zeal at this septuagénaire! And especially what a comprehension of the relativity of our scientific knowledge! The unknown of yesterday, said Flammarion, is the truth of tomorrow! I will dare to add: "the absurdity of today is the truth of tomorrow" a faithful friendship, fray of veneration, attached me to this large Flammarion, which one learned how to like and admire more especially as it more was known. On the last book that it sent to me a few months ago with an affectionate dedication, it wrote: Homage of a perpetual student. Yes! It was well there the character of this incomparable man. At the same time, it is a program of life and an example for us all. In the presence of frightening the mysteries which surround us de.toutes.parts - because really we did not include/understand anything yet in immense Kosmos - we must in all humility remain students, seek to know initially, and, later, if it can be included/understood.
Charles Richet
(Published in the Review Métapsychique N°3 May-June 1925)