The Church in the British Isles. 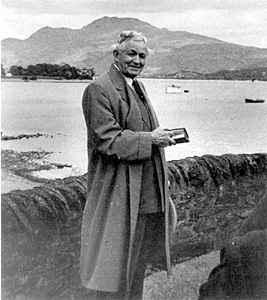 As a young man, David O. McKay was a missionary in Scotland, his ancestral homeland. This picture, on the shores of Loch Lomond, was probably taken during his tour of the European missions in 1952, the year after he was sustained as President of the Church. Courtesy Utah State Historical Society.
by Bryan J. Grant


I afterwards learned that a dispatch was sent home by the captain before he struck out into the wide Atlantic, highly extolling the behaviour of these emigrants, and the perfect order and propriety of all their social arrangements…. I went on board their ship to bear testimony against them if they deserved it, as I fully believed they would; to my great astonishment they did not deserve it; and my predispositions and tendencies must not affect me as an honest witness. I went over the Amazon's side, feeling it impossible to deny that, so far, some remarkable influence had produced a remarkable result, which better known influences have often missed [Dickens, p. 232].

The 895 LDS emigrants under the direction of Elder William Bramall were well organized. The ship's captain explained:


The most of these came aboard yesterday evening. They came from various parts of England in small parties that had never seen one another before. Yet they had not been a couple of hours on board, when they established their own police, made their own regulations, and set their own watches at all the hatchways. Before nine o'clock, the ship was as orderly and quiet as a man-of-war [Dickens, p. 223].

THE CHURCH IN BRITAIN IN THE TWENTIETH CENTURY. The early years of the twentieth century were troubled times for the Church in the United Kingdom and Ireland. Much of its strength had been drawn away through emigration; between 1870 and 1892 Church membership declined from 9,000 to barely 2,600. Then, against the backdrop of the polygamy issue, and fanned by newspaper exposés and by novels from writers such as Sir Arthur Conan Doyle and Winifred Graham, an "anti-Mormon crusade" reached a peak in 1911. Persecution was rife, violence was threatened, and missionaries were occasionally tarred and feathered, as in Nuneaton, Warwickshire. Nevertheless, the Church grew in this time of trials, more than doubling in membership between 1897 and 1910, and averaging more than 8,000 members in Great Britain from then until after the end of World War I. But with missionary work disrupted by two world wars, a modest decline kept membership at an average of about 6,000 through 1950.

In the mid-1950s, membership in the United Kingdom and Ireland stood at 9,000, when the second major phase of the growth and development of the Church in the British Isles began. Emphasis was given to "staying and building," and steps were taken to ensure that Church members in the United Kingdom did not need to emigrate to enjoy all the blessings of the Church membership.